Evolution of a Talisman: Fifth Pentacle of Mars in Hoodoo and European Magic

Talismanic magic is used all over the world. In the hoodoo tradition, certain popular European grimoires of the 18th and 19th century made a big impact upon which talismans were favored by American practitioners.

The recognition that not everyone in the 18th or 19th century could read is an important consideration when relating how these talismans were used. Owen Davies in his history book Grimoires remarks that merely owning a grimoire was commonly believed to bestow special powers to the owner, even if he or she could not actually read its content. Even today, many magical talismans contain writing in languages that a practitioner might not be able to read or understand, yet they copy these foreign phrases to the best of their ability. 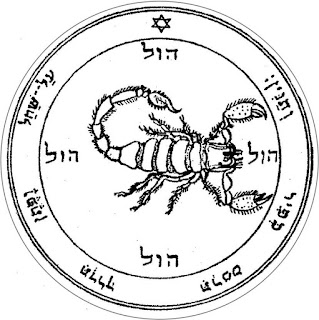 Above we have the Fifth Pentacle of Mars, as put in L.W. De Laurence's 1914 edition of The Key of Solomon the King. (I choose this edition for being a traditionally popular one amongst hoodoo practitioners, even if many people are horrified by De Laurence's plagiarism of the book which was originally assembled by S.L. MacGregor Mathers through his research.) In this edition it is said that the talisman "is terrible unto demons, and at its sight and aspect they will obey thee." 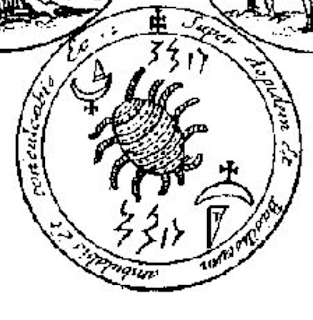 Here is the same talisman in a very corrupted form as presented in The Petit Albert. This book was assembled circa 1700 from pieces of earlier texts, and it remained popular amongst French-speakers for quite some time. The corruption of the Hebrew letters is very evident and interesting. In this grimoire, the seal is said to protect against being poisoned by venomous animals (a sensible assumption to be made by someone who puts the weight on the image of the vermin.) It is prepared, interestingly enough, as if it is a Sun talisman rather than a Mars talisman. 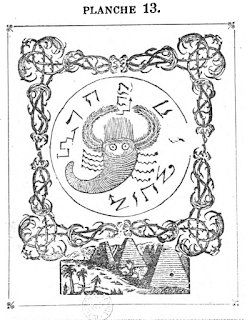 This is from a text known as The Old Man of the Pyramids, which seems to be a variant on the Key of Solomon but somewhat rewritten to play into the early 19th century fad of Egyptology, sparked once Napoleon brought some Egyptian artifacts to Europe and caused the Rosetta Stone to be translated. In this instance the talisman is said to allow the user "to see everything that happens inside houses, without being obliged to enter, or to read the thoughts of all the people he will approach, or with whom he may be in contact, and be able to serve them or harm them at will." This text isn't as common amongst hoodoo practitioners, and is better known through a variant called The Black Pullet (La Poule Noire.) The version of the talisman in that grimoire, though ascribed with the same properties, is even less recognizable: 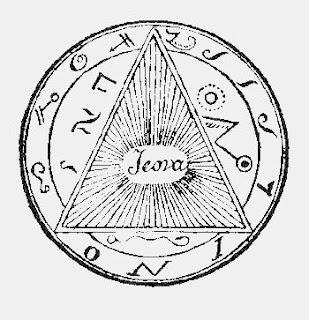 The Black Pullet talismans tend to have so little semblance to the Old Man talismans, that despite nearly identical text, it would appear the talismans were derived from an altogether other source, or perhaps came from a completely original design.