I am sometimes criticized for sharing and recommending spells that I myself have never tried; however, I consider this somewhat akin to expecting a doctor should have personally tried every drug he might prescribe to his patients. If the doctor doesn't have the same disease as the patient it will do no good at all, and different people have different reactions to the same medicines anyway: thus there is no advantage in the doctor's having actually used the same drugs to good effect or not. 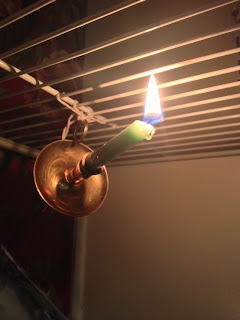 Thus we get to the matter of this old time breakup spell which was given in a book by Zora Neale Hurston:

"Take nine needles, break each needle in three pieces. Write each person's name three times on paper. Write one name backwards and one forwards and lay the broken needles on the paper. Take five black candles, four red and three green.
"Tie a string across the door from it, suspend a large candle upside down. It will hang low on the door; burn one each day for one hour. If you burn first in the daytime, keep on in the day; if at night, continue at night. A tin plate with paper and needles in it must be placed to catch wax in.
"When the ninth day is finished, go out into the street and get some white or black dog dung. A dog only drops his dung in the street when he is running and barking, and whoever you curse will run ad bark likewise. Put it in a bag with the paper and carry it to running water, and one of the parties will leave town."

Hurston either described the spell very badly, or likely never performed it herself before repeating it. One obvious issue is that she gives instructions to have 12 candles, but only instructs to burn one candle a day for 9 days.

Having finally had an occasion to try out this spell myself, I had to work on sorting out this obvious problem, as well as a bunch of other less obvious issues.

As said before, the instructions say to use 12 candles, but instruct to burn them for only 9 days. I decided probably the spell was intended to last for either 12 or 13 days, and the 9 day instruction was just a mistake. (The alternative would be burning about 1 and 1/3rd of a candle daily, which sounded like something that wouldn't be simply forgotten in an explanation.)

In old hoodoo, black candles would be for harm, red for hate or violence, and green would be for jealousy. So a suitable bunch for a breakup spell. As mentioned in this hoodle candle post, dressing oils were not so typically used in pre-1940s candle rituals as they are today, so just the candle colors are what matter. There are supposed to be five black, four red and three green. This is possibly but not definitely significant -- it may mean the candles are intended to be burnt in some kind of order, either in growing numbers (first the green candles, then the red, then the black) to increase the problems of the couple, or in decreasing numbers (first the black, then the red, then the green) to lessen the relationship or dwindle their love. It's also possible that they are just burned randomly to give the couple a new problem every day, and the strange distribution of the candle colors has something to do with the numeric error Hurston seems to have made at some point during her transcription.

For my purposes, I decided to burn the candles in random order, to give the couple a new bunch of problems each day. It was a situation where names weren't known, so I had to rely on a photograph which I cut in two, and positioned on a metal tray with the two figures aimed in opposite directions. This is how it looked after all 12 candles were burned (the image is sufficiently obscured I think there's no risk of anyone being identified here.) 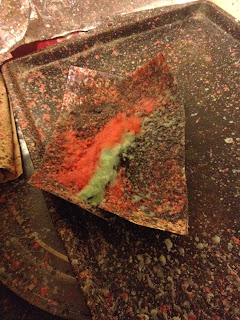 Now, there are some other problems with Hurston's method that are less apparent than the candle numbers. For one, this spell is MESSY. Don't do this in a room where you can't make a mess, and I very much advise covering the walls in tinfoil and the floors with any other splash guards you can. Even with all those precautions, I was finding wax all over the room several feet away from the spot where the candles were burned.

Next -- Hurston says the candle should be burned upside down, but I swiftly found that that doesn't work at all. Why? Because the candle wax running down over the wick snuffs out the flame. Instead the candle needs to be strung up to burn sideways, so that it can be made to drip but still maintain a fire.

Hurston says to do this in a doorway, and it's possible that it's a position of some kind of significance (because it's the division between two rooms?) but it also could just be that it is a conveniently small space to hang the string across. In any case, I had to do away with the doorway bit for reasons of both privacy and mess, and because I found hanging the candle from a wire shelf held it more steady and less likely to catch the support strings on fire.

Like we've not been forced to tamper with the spell enough already, there is next the matter of the dog poop. Nowadays, it's uncommon to find dogs left to run loose in the streets, and owners are expected to clean up the poop of their dogs when they take them out for walks -- so finding suitable dung is actually not that easy to do, unless you own a dog yourself. I do not.

While I did give serious consideration to wandering around parks and digging in the trash bins hoping to find a discarded poop-collection bag, in the end I decided I was less likely to wind up getting trichinosis if I just went the route of finding an herbal replacement. Asafoetida is sometimes called "devil's dung" and thus sounds suited to causing harm. It might not make the person "run and bark" but it will turn their love life to shit all the same. Dogbane might also offer the harmful dog aspects. So I decided upon a combo of these two, to be bagged up with the candle remains and pictures.

The final step is to "carry it to running water." Hurston omits the step "and throw it into the water" presumably because this was obvious to her. Old hoodoo spells favor throwing things into running water when you want to make the person run away, as in this breakup spell.

So, this is the modified form of the old breakup spell:

After 12 days, on the 13th day pack up the remaining wax-covered paper and needles into a paper bag, and add a handful each of dogbane and asafoetida. Close up the bag and take it to running water.