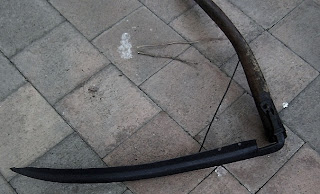 Teke Teke is an imitative noise, to represent a scraping or thumping sound. In this instance, to imitate the specific scraping sound of a bloody torso dragging along the pavement, being pulled on its own elbows.

Teke Teke, see, was a girl who fell on some railroad tracks after some childhood bullying gone awry; she was unable to move away in time to avoid the oncoming train and was sliced in half. Her ghost now wields a scythe and she, legless, creeps around on her elbows, pulling herself along to chase down victims whom she slices in half in imitation of her own disfigurement. As she hunts you down you can hear her come: click-clack, click-clack, click-clack (teke teke).

Nice also: "Anyone that hears of this story will see Teke-Teke's lower half walking aimlessly around the countryside within three days." 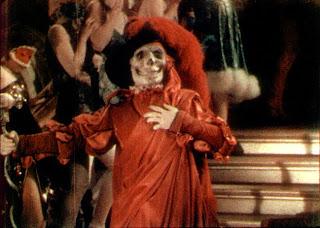 Aka Manto: The Ghost With the Red Cape

We seem to be developing a series of posts about Japanese ghosts! After the previous one about Slit-Mouth Woman, I was looking into some more data about the ghosts of Japan and came onto Aka Manto, or Red Cape.

Red Cape is reportedly a handsome man wearing a red cape: however, he wears a white mask to disguise his good looks, as they had brought him problems in life. Presumably this is the cause of the unhappiness which turned him to a malicious spirit. He usually only is said to haunt girl's bathrooms, and especially inclines to the final stall or the fourth stall (four is an unlucky number in Japan as it is a homophone to the word for Death.)

An experience with Red Cape finds one sitting on the toilet. A man's voice appears mysteriously, asking: "Do you want a red cape or a blue cape?" To answer with a preference for either results in one's own grisly murder: asking for red will find Red Cape appearing and cutting you to shreds or beheading you so that your blood will resemble a cape, asking for blue brings him to appear and strangle you or else drain the blood from your body so that your skin turns blue.

Also, Red Cape is not so easily fooled as Slit-Mouth Woman. While giving her an alternate answer to her pre-set questions can confuse her into leaving you be, Red Cape responds to any requests for alternate colors of cape by simply dragging you away to Hell -- or, some say that if you ask for yellow, he will end his mischief at merely dunking your head into the toilet. The most effective way to avoid Red Cape's wrath, however, is to refuse any of his offerings.

Yeah, it's 2 AM, I'm alone, live near a train, and anything that sounds at all like a clicking noise is freaking me the hell out. (Why do I live amongst so many tick-tock clocks???) 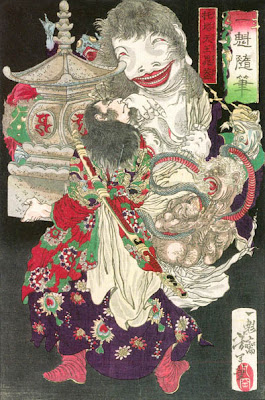 I confess, I'm a scardey-cat, and I have the particularly unreasonable fear of ghosts, of all things. I managed to completely terrify myself into sleeplessness one evening by just reading the Wikipedia article about the Slit-Mouth Woman.

According to Japanese legend, the ghost of the Slit-Mouth Woman approaches her victims on the street, covering her mouth -- in the old days she used the long sleeves of her kimono as her cover, but in modern form she wears a surgical mask. She asks her victim, "Do you think I'm pretty?" A no answer means instant death; but a yes prompts her to reveal her face, showing that her mouth has been carved into a Glasgow grin. She asks again if she if pretty. Again, a no ensures instant death, but a yes this time means she blesses you with the opportunity to look as pretty as her, by slicing your mouth open into a similar Chelsea smile. In some versions of the story, she will also kill you when she does this.

The legend however does say there are ways to escape. The Slit-Mouth Woman, like many ghosts of lore, is easily confused. Simply repeating your answer multiple times, whatever it may be, can be enough to confuse her and allow you a chance to escape. Another (very Japanese) way to flee her wrath is to simply tell the ghost of the Slit-Mouth Woman that you are in a hurry and need to be elsewhere: she will apologize for her bad manners for detaining you, and let you be.

According to the legend, Slit-Mouth Woman was a beautiful girl whose jealous husband mutilated her face by slitting her mouth out to her ears. This trauma drove her to insanity, and this is why her ghost remains bent on inflicting the same fate upon others.