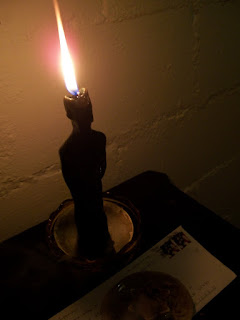 Figural candles, also called image candles or iconic candles, are like a halfway point between a candle and a so-called Voodoo Doll or poppet. Some people even use the wax candles in place of dolls for certain workings, since they come easily available and already shaped.

Interestingly, I have found that when using figural candles for magic spell casting -- after having prepared them according to the method in Denise Alvarado's Voodoo Doll Book -- they behave differently from other candles. They take on personality, and are uncommonly good for predicting the future outcome of the spell based on the behavior of the wax. Once I did a spell using a figural candle on a person who had been using some other magic of their own. It was a multi-day spellcast, but after a few days the target became aware that I was working on her. The candle on that day exploded, went out, and shot a lump of wax at me that looked like a hand making a particular rude gesture. 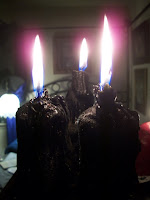 Another time I was doing a spell on a girl who was making a lot of trouble for my client. I used a figural candle to represent the troublemaker -- but she kept on making trouble, as her candle would drip with wax uncontrollably, making huge messes all over my altar and room. This was a sign that the girl was going to keep trying to make trouble and "messes" for the client. 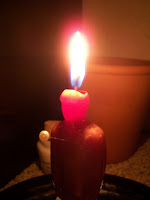 Another interesting eventum with figural candles was while I was doing a breakup spell using a couples candle. One side of the candle -- the female -- was burning up much hotter and more rapidly than the other, so I decided to put it out early and give the other side time to catch up. I snuffed the female candle.... then about 20 or 30 seconds later the candle, on its own, re-ignited. Physically this was probably just the result of the traveling flame trick put to inadvertent use, but magically I took it to represent that the girl was going to be very hard to influence to follow my directions.

Figural candles are some of my favorite candles to use when doing spellcasts for clients because of the abundance of information they can allow. 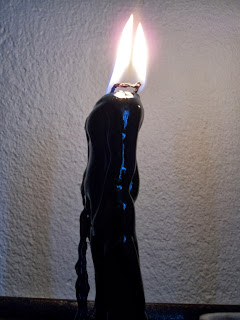 Here is an example of a candle with a split flame -- since it was part of a breakup magic spell, this could be perceived as a favorable omen. Why? Split flames usually indicate the duplicity or that the subject is being drawn in two directions. Of course, the same thing on a love candle would be a bad sign for these reasons.