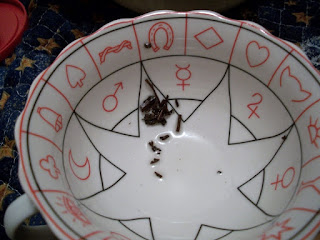 This year for Christmas, I got a gift from The Church of Good Luck (thanks, Rev. Jim!) -- a Cup of Destiny Fortune Telling Cup. If you've ever thought that breakfast and divination needed to go together more smoothly, here's the answer to your prayers.

The above is a photo of an actual reading I did with it, for myself. I was testing it with the simple question -- how will my day go? I perceived there to be three markings of importance:

a trail of dashes
a cherry
a tiny butterfly

The cup comes with a little book that offers some suggestions for how to read the symbols, so I went by it here.

DASHES: A number of short lines together suggest a period when you will be running around a lot more than usual, with a number of short trips and local journeys coming up. Some of these could be a waste of your time, so plan meticulously to avoid frustration and depleted energies.
FRUIT (general): A productive phase lies ahead, particularly in your emotional life. Although fruit does not suggest romance, it does indicate improvement in your social life, family links, and perhaps relationships with work mates too. A happy and balanced life generates positive energy and attracts good experiences, so this symbol is also one of general optimism and success.
BUTTERFLY: An ancient symbol of the soul, butterflies denote pleasure and passing joys. Occasionally they are a warning against fickle actions or an inability to settle down a task or relationship. Usually though, they suggest delightful experiences and are considered lucky.

Here's now the day ultimately went: It was the single day of the week when I have work to do outside of the house, so I had to make the trip a few suburbs over for this purpose. The woman I help out is an herbalist, and so I brought her a translation of a recipe I'd stumbled upon which I thought she would enjoy. She ended up giving me a leftover Christmas present of some orris cordial she'd made too much of. We also chatted a bit more friendly-like than usual. Did the work, got paid as expected. Came home, performed a spellcast that was arranged. After this I went online, made some financial arrangements, examined my book sales and was pleased it was looking like a good month in that regard, and then I checked my email and found some stuff from Lucky Temple clients that needed to be answered. One of them was a request from the day before which I'd been putting off because it was a matter I wasn't too enthusiastic about, and was trying to figure out the best way to handle it. The other was for a Spellcast Consultation Reading which I then did, and ended up taking several hours. I had meant to do some translation work that evening but the reading ended up taking pretty much the rest of the night.

So. How did this hold up? Well, one could say that my traveling to work was the travel indicated by the dashes, or else that the number of tasks in my day total were the "running around" it meant. The cherry would probably be the socializing done at work; though regardless of what the book says, I actually would wish to read a cherry as some kind of reward or earnings, and that could therefore be either the money I earned in the day, or else something like the bonus cordial I got. Anyway -- then finally the butterfly. That could either be the task I put off, or else it could be a little "good luck" thing, like that I had so much paid work today or that my sales were doing well. Could even be the cordial again.

Something I didn't see the book indicate, but which is my natural inclination, is to read whatever shapes in the cup that the tea leaves land on as being significant in the interpreting. The butterfly was the only one that landed on a shape, it having landed in the section of the cup portraying a horseshoe. (Though I admit I can see a flaw with wanting to read this way -- simply the way I hold and drink from the cup means shapes are more inclined to be found on the snake or the horseshoe.) If we interpret then that the butterfly relates to that which the horseshoe represents, which is usually agreed to be good luck, then we could say it means that there was either fleeting good luck or a delightful experience of good luck.

Here is how I personally wish to read the cup:

The tiny butterfly, on the horseshoe, means a tiny bit of good luck.
The large cherry means a large amount of "fruits of one's labor" representing the money earned.
The trail represents travel, either physically or figuratively -- the winding and chaotic pattern of the "steps" could be the variety of tasks done if figurative.

I will say, I had a professional tea leaf reading done in Edinburgh, Scotland some years ago, and I think this little cup thing here was much more accurate.