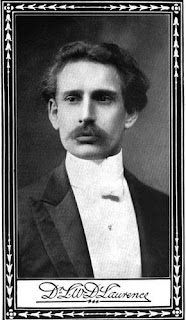 L.W. De Laurence was born in 1868 in Ohio. By the time of his death 68 years later, he'd become one of the most influential occultists around the world.

He is often despised for his blatant book-pirating of works by people like S.L. MacGregor Mathers: a loophole in US copyright laws at the time allowed him to reprint new books by British authors as if they were in the public domain. Since he had already built up a reputation for himself as a hypnotist, to make these books more sellable from his company, he would doctor the text so that his own name was listed as author. This caused the name De Laurence to be associated with some of the most respected magical texts of the 19th and 20th centuries. His mail-order occult business ensured these texts were spread around the globe, and consequently so was his reputation. In fact, De Laurence is better known outside of the US than he is within his homeland, due to the spread of his merchandise.

Eventually, occult products became another De Laurence specialty. The original formulas for perfumes and incenses he sold were top quality, and their prices reflected this (his Vale of Kashmar perfume sold for about the equivalent of $40 for two ounces in today's money.) We know it was good stuff because, much like his books, his original products were actually relabeled versions of goods manufactured by the era's top-of-the-line perfumers and purchased by himself for resale.

While his actions may have been sneaky, at the time that he was operating it was all perfectly legal; the only thing he did that was not, was the actual selling of occult products by mail. An unhappy ex-employee turned him in for this -- excerpts from the trial are available in Carolyn Morrow Long's book Spiritual Merchants. The lawsuit didn't seem to stop the De Laurence company, however. They continued going strong for many years, even outlasting the companies that manufactured most of their original perfumes and incenses. The official De Laurence Co. are technically still in business, but I am told their focus is now on jewelry.