Smokey Candle Burns: What Do They Mean? 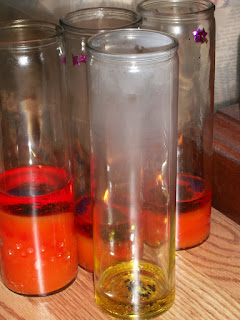 (EDIT: 8/15/16 - I have turned off comments on this post. I did not mean for this to become a post where I'd give free candle readings to people -- please read the article so you can do your own interpretations!)

Reading omens of candle smoke is done usually when one burns a glass-encased candle rather than a standalone candle, since the glass is what captures the soot from the candle smoke, thereby making it easier to "read" how the candle burned over its course, without having to sit and observe the candle the entire time that it burns. Smoke reading can be done on freestanding candles as well, but it's not as typical since it requires either a very small candle or a very long attention span.

Smoke coming from spell candles is generally but not always viewed negatively; Samantha Stevens writes, "In general, when you first light the candle, if the candle starts smoking quite heavily right away that is a very good sign. It means that negative energy is being removed from the situation. If the smoke is white, it means your prayers will be answered right away. If it is black, your prayer will probably be answered, but it is possible there will be obstacles in a way. You have to use your gut instinct if the flame doesn't smoke at all. Sometimes that can mean there are no obstacles and other times, it means that the matter is long over." 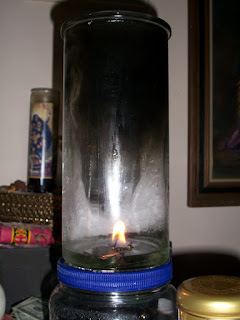 Like most divination methods, there isn't a single agreed-upon meaning for all of this, and it can vary practitioner to practitioner. Hoodoo Momma writes:

"- White smoke on the glass is a good sign and an indication of success and blessings.
- Black smoke on the glass is a sign of struggles. It is my experience that the situation will take a series of candles to clear as the spirits are fighting a battle. They need the continued energy of the flame and perhaps an offering. Spiritual cleansings are also indicated."

My own observation regarding black smoke is similar to Hoodoo Momma's. I find it to usually indicate at least an obstacle, if not even a sign of a major problem. Frequently it turns up when there's some incompatibility with the desires of the spell and the present realities -- I recall one case which may have been my smokiest ever, which was caused when the client was secretly casting Intranquil Spirit spells in addition to the other love work she'd hired me to do: there was an incompatibility between the peaceful love work I was trying to perform and the misery-bringing ways of the Intranquil Spirit. Another love spell that kept burning black was on the target's Zodiac candle: in that instance, the subject's personality was simply incompatible with the kind of romantic love being asked of him.

White smoke I actually don't seem to find to be a lot better than black smoke; if there's a lot of it, it's still a sign of a problem. Some sources indicate that it means the problem is being 'burnt through' and that especially if the smoke stops by the end of the burn, it means the trouble has been cleared. I don't think I can say I've found that so.

An exception to the above, however, can come if there is a shape made in the soot or smoke. A totally black burn with an auspicious shape formed in the smoke can cancel any negative connotations. I have also seen this happen with client work. 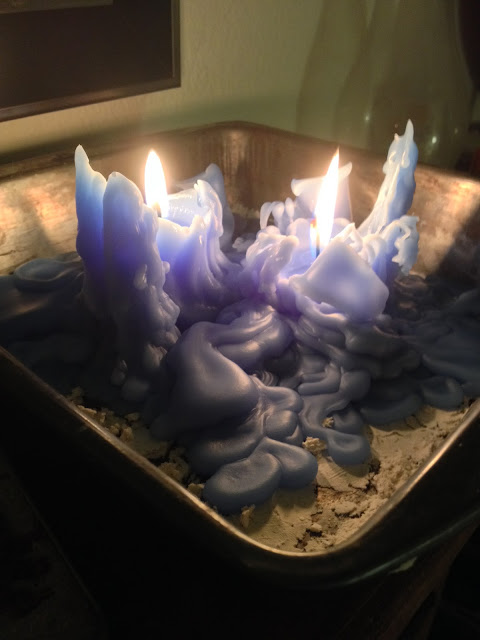 I should mention here that, although certain burn patterns have a "traditional" meaning, I do not actually find them to necessarily be true/reliable. Everyone longs to know in advance whether or not their spell will succeed -- this is normal, but we must be cautious not to let it turn into obsession and negativity by overthinking the work. Many people write me, in quite a concern over what sounds to be perfectly normal activity in a candle burn, hoping that I can tell them what it means. This is about as sensible as being concerned over what it means for water to be wet. Normal activity is not likely to be spiritually significant, though a trouble-free burn is certainly more desirable than one full of the "weird" phenomena that is more likely to be meaningful. If you don't burn candles often enough to be aware of what is normal versus not normal, then you are not ready to read candle omens. In short: Do not look for omens until you know what to look for.

Additionally, one should avoid putting too much stock in an omen until after the spell is completed -- I often get questions that go approximately "I'm burning a candle and it's burning smokey/hot/low/flickering, what does it mean?" If this is happening, wait till the candle finishes its run; by the time the candle is completely burned out, you might have a much clearer sign of the spell's progress.

If burning multiple candles in a spell and finding that they all burn in different ways, try to account for what each individual candle was supposed to symbolize. If they all symbolized the same thing, then any variations can be attributed to simple mechanical defects in the candle itself.

There is only one omen from a candle that I have found to have a consistent and reliable meaning in reading -- regardless of candle type, regardless of the intent behind the spell, if a flame goes out prematurely by itself, that is always inauspicious and indicates the work is really having a hard time coming through. Unless you're dealing with a defective candle, it probably means that it will not come to pass. When this happens, you can repeat your prayers and light the candle once again. If it goes out a second time, you can relight it one more time; but if the flame extinguishes itself again after the third try, it means your spell will not come to fruition or that the spirits are rejecting your offer. However, if the candle truly is defective (for example, if you bought a cheap brand that always uses a wick that doesn't burn well) then it means nothing, and your spell might yet succeed. This is why it's essential that you be aware of how a candle normally burns before you attempt to read your fortune from its behaviot.

You can read more about spell cast omens from candles in these previous posts: