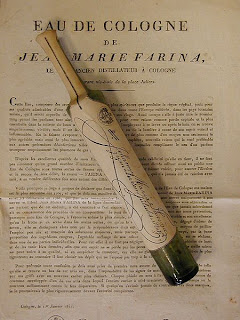 The original recipe for cologne was reputedly given to St. Elizabeth of Hungary by an angel -- the concoction was known as "Hungary Water" and was used primarily as a medicine, rather than just a mere fragrance. Charles Godfrey Leland remarked that it therefore was appropriate hoodoo practitioners would use such a substance for feeding their conjure bags and other talismans.

The term cologne actually comes from a later preparation, Cologne Water (named for the German city.) The original Cologne Water is a spirit-citrus perfume launched in 1709 by Giovanni Maria Farina (1685–1766), an Italian perfume maker from Santa Maria Maggiore Valle Vigezzo, Italy. In 1708, Farina wrote to his brother Jean Baptiste: "I have found a fragrance that reminds me of an Italian spring morning, of mountain daffodils and orange blossoms after the rain". He named his fragrance Cologne Water, in honour of his new hometown.

The Original Cologne Water composed by Farina was used only as a perfume and delivered to "nearly all royal houses in Europe". His ability to produce a constantly homogenous fragrance consisting of dozens of monoessences was seen as a sensation at the time. At the time, a single vial of this aqua mirabilis (Latin: miracle water) cost half the annual salary of a civil servant. When free trade was established in Cologne by the French in 1797, the success of Cologne Water prompted countless other businessmen to sell their own fragrances under the name.

Cologne is now a generic term for an alcohol-based fragrance, usually mixed with a small amount of water. Popular lucky colognes used by American folk magic practitioners include Florida Water, Hoyt's, Kolonia 1800, Jockey Club and Bay Rum. Certain conjure formulas like Van Van, Has No Hanna and Essence of Bend Over also began as similar spiritual alcohol perfumes. Traditionally they'd be used to feed mojo hands or to impress spiritual powers on one who wore the scent, by way of their special fragrances.

If one is in the habit of reading older occult and hoodoo themed texts, one notices that perfumes were more popular in the past than the scented oils which have nowadays overtaken them and their utility. Florida Water and Hoyt's are the only hoodoo perfumes that seem to still get much use, but the original Van Van was a perfume, and other scents like Bay Rum and Chypre used to be popular. Even the famous Essence of Bend Over began as an alcohol perfume.

Perfume has the advantage of soaking into things more easily than scented oils, especially mojo hands which just become greasy and dirty looking when fed with oils. The old time leather packets and hands also benefit from alcohol perfumes, since the leather contracts and tightens around its magical innards when fed with such substance.

This helpful list of 14 unusual ways to use perfume can help you get some ideas for employing old fashioned magical mixtures in your life to bring luck, money, cleansing and all the other advantages that these old perfumes were renowned for bringing. Give it a try!