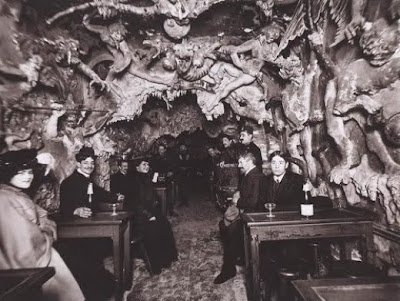 Accusations of Satanists performing "Black Masses" date back to the 14th century -- however, these earliest accounts were part of accusations against the Templars, who aren't really known for being Satanists, thus calling into question the validity of the claim. (Sounds like it originated as just a false accusation to make against political enemies... or as something to get out of them under torture as we'll elaborate upon.)

Until the 19th century, actually performing a black mass was grounds for execution in most parts of the western world, and being by nature an event with many witnesses, it seems probable that these rituals were extremely rare, if they were really performed at all, up to that time. Most of the details sound as unlikely as the accounts of "witch's sabbaths" from the period, so-called confessions of which were usually being extracted by means of torture. As we know today, people who are tortured for long enough have a tendency to confess to just about anything, making their word no longer reliable.

By the 19th century, rationalism had taken hold and freedom of religion was respected to a degree, making it legal in more places for alternative religious practices to be performed. The first really reliable accounts of Black Masses date to this period, being now provided by people who were not forced under torture to tell their story. However, the known "accounts" of the mass from prior sources were used to influence these performances. It's notable that many of the "Satanic" actions alleged are the same as some random things the Marquis de Sade describes in his own pornographic books for the mere sake of being offensive, rather than suggesting they have anything to do with devilry.

The 1891 book Down There gives the following short history of known and alleged tales of Satanic masses: