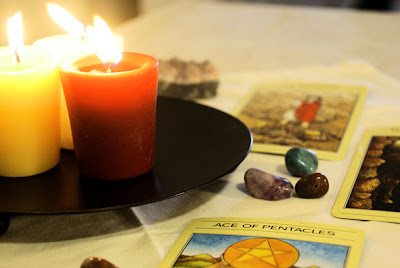 When one refers to the practice of fortune telling, it usually means the practice of analysing character or predicting the future via one of any number of methods which are based on the ancient belief that there is no such thing as 'chance' but that, rather, all actions are dictated by superior, outside forces and the notion that all the universe has to it an underlying pattern, so that past and present events, regardless how coincidental or irrelevant they may seem, are in fact clues to determining unfolding events.

There are many different forms of fortune telling. The most primitive, clumsy, yet enduring method is the simple recording of sequences of important events. It is usual for animals of any sort to conclude that if event A tends to lead to event B, that seeing event A will again lead to event B. Ivan Pavlov and his famous dogs demonstrated this well. This leads to the practice of telling the future via omens. Omens may be considered either good or bad depending on their interpretation, and the same sign may be interpreted differently by different people or different cultures. When the world is seen as an orderly system following a pre-set sequence, any perceived disturbance or variation is viewed as forecasting an unusual turn, be it for good or bad. Some predictions are mundane and make little immediate sense: if a strip of bacon curls up when frying it means a new lover, if you sit at the corner of a table you'll never marry; while other seem more logical through a presumption of 'sympathetic' events: if your wedding ring breaks it's an ill-sign for your marriage, if you step on a lizard it means your enemies will be vanquished.

Many practitioners of modern magic spells use omens to determine whether their workings have been creating the desired effects and patterns: if a man casts a love spell on a woman named Sue, and afterwards encounters an unusual number of women bearing the same name, it's considered a sign that his spell is working. However, when divining by way of omens, one needs to wait for the unusual event to occur, for it is a purely passive way of telling the future. To instigate answers to the portents of novel situations, other methods were developed. Again employing the belief that if there is no such thing as random chance, that indeed all results must be caused by outside powers, the practice of sortilege, or cleromancy, came into play. Many popular forms of fortune telling to this day are based on sortilege -- tarot reading, I Ching casting, or even the simple flipping of a coin are part of this practice. The distinctive property of sortilege is that it employs tools -- such as a deck of cards -- adorned with markings, leaving a finite and predetermined number of possibilities their laying or throwing might portend. The ancient Romans sometimes wrote verses of famous poets on tablets which they used to forecast upcoming events, and this evolved into the practice of bibliomancy in which flipping to random pages of a book, such as the Bible, is used to predict coming tendencies. A third type of divination is augury. Done, generally, with much ceremony, it nevertheless involves the observation of omens through natural phenomena but in a more controlled environment. For example, the practice of extispicy requires ritually sacrificing an animal in order to then examine its entrails for any remarkable items; while this is observing natural circumstances similar to divining by omens, the omens are exacerbated by the ceremonial practice. Other items like smoke and wax have been used for this, as well as the famous tea leaf readings. The most remarkable thing about fortune telling is its continued success: despite centuries of ecclesiastical condemnation and the shunning by skeptics and rationalists, the fact that there is still a demand for the art of the diviner today is obvious at all levels of society.