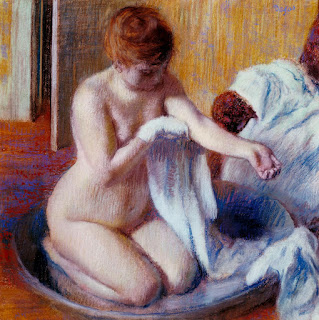 Not so long ago, running water on tap was not all that common a thing. This was especially the case for folks living in poor or rural areas -- like your basic old-time hoodoo practitioner was probably like to be.

The habit of finishing a traditional hoodoo bath spell by way of chucking the water out into a road or river probably seemed more logical when a "bath" didn't mean a giant porcelain tub full of liquid. It probably meant a sponge and a bucket.

This post from over at the Gibson Girl's Blog has some authentic old time instructions for a spongebath (not hoodoo-specific, but I doubt there was a ton of variation other than that a hoodoo practitioner would scrub up or down as needed for the spell.) Perfumes and scented herbs apparently were even still added when using this washbucket method -- maybe this is why some old spells instruct to use what seem pointlessly miniscule amounts of oils or soaps in the baths ("three drops" etc.) In any event, have fun and use what you can from this data.

According to Chavasse's Advice to a Wife and Advice to a Mother on the Management of her own Health, a spongebath should be done as follows:
[One needs:]
(1.) A large nursery basin, one that will hold six or eight quarts of water (Wedgwood's make being considered the best); (2.) A piece of coarse flannel, a yard long and half a yard wide; (3.) A large sponge; (4.) A tablet either of the best yellow or of curd soap; (5.) Two towels—one being a diaper, and the other a Turkish rubber. Now, as to the manner of performing ablution. You ought to fill the basin three parts full with rain water; then, having well-soaped and cleansed your hands, re-soap them, dip your head and face into the water, then with the soaped hands well rub and wash your head, face, neck, chest, and armpits; having done which, take the wetted sponge, and go over all the parts previously travelled over by the soaped hands; then fold the flannel as you would a neck-kerchief, and dip it in the water, then throw it, as you would a skipping-rope, over your shoulders and move it a fevr times from right to left and from left to right, and up and down, and then across the back and loins; having done which, dip the sponge in the water, and holding your head over the water, let the water stream from the sponge a time or two over your head, neck, and face. Dip your nead and face in the water, then put your hands and arms (as far as they will go) into the water, holding them there while you can count thirty. Having reduced the quantity of water to a third of a basinful, place the basin on the floor, and sit (while you can count fifty) in the water; then put one foot at a time in the water, and quickly rub, with soaped hands, up and down your leg, over the foot, and pass your thumb between each toe (this latter procedure tends to keep away soft corns); then take the sponge, filled with water, and squeeze it over your leg and foot, from the knee downwards, —then serve your other leg and foot in the same way. By adopting the above plan, the whole of the body will, every morning, be thoroughly washed.
A little warm water might at first, and during the winter time, be added, to take off the chill; but the sooner quite cold water is used the better. The body ought to be quickly dried (taking care to wipe between each toe), first with the diaper, and then with the Turkish rubber. In drying your back and loins, you ought to throw as you would a skippingrope, the Turkish rubber over your shoulders, and move it a few times from side to side, uptil the parts be dry.
Although the above description is necessarily prolix, the washing itself ought to be very expeditiously performed; there should be no dawdling over it, otherwise the body will become chilled, and harm instead of good will be the result. If due dispatch be used, the whole of the body might, according to the above method, be thoroughly washed and dried in the space of ten minutes.